Andrew Tunney (aka 2hands) is a freelance artist and writer based in Manchester, UK. He has worked internationally in illustration, character design, comics, print, clothing and live-art. His work has been featured by Comics Alliance, ArtSlant Street, DigitMag, The Bluecoat, Starburst, Forbidden Planet International, Tumblr and Juxtapoz.

His work is often youth focussed, street driven, with an eye for fashion and is inspired by film, comics and animation. He earned the nickname '2hands' because he can draw with both hands at once. He is not ambidextrous; he just works hard.

He is currently working as a freelance illustrator and developing his own projects; the latest being THE WRITTENS, an experimental art and photographic travel journal. 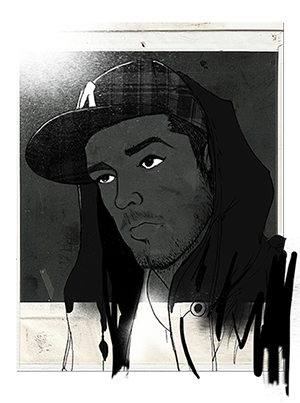 Over the last 10 years Andrew has steadily planted both hands in the past, present and future of Manchester's culture.

He has worked with cultural institutions Tony Wilson, Channel M and Dpercussion, continued to work with forward-thinking charity NOISE Festival and was quietly instrumental in Manchester's hip-hop scene during the 00's street art boom as the original art director of Sketch City. Now he is part of the burgeoning UK comic art scene, his first comic GIRL&BOY being nominated for BEST COMIC at the first ever British Comic Awards.

You can see more of Andrew's work at his Instagram where he posts live updates of his travel sketches and photography. Andrew also has a Tumblr where you can see observational sketches, fan-art and some of his ongoing personal projects like his Movie Faces series of actor drawings and his Cosplay Polaroid collection. You can also read Andrew's latest project The Writtens there for a limited time before it moves to a new, more bespoke, setting.